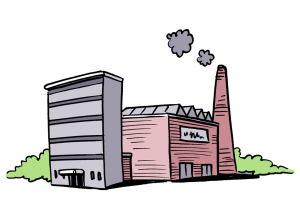 The headquarters and production lines 1 and 2 are located in Breukelen. Bicsma resides at the Breukelerwaard industrial area. The advantage of this location is its central position and good accessibility, which have been the main reasons to choose this spot for the production plant. However, an issue not taken into account was Bicsma’s rapid growth. Meeting the city planning requirements has therefore become an ever increasing challenge. This problem has been the predominant motive for realising the expansion in Woerden.

The production department in Breukelen (lines 1 and 2) is located in a large warehouse divided into four parts. The two production units are separated by the bottlery. The bottlery is connected to the distribution space which contains a loading platform. At the distribution location the parcels are sorted and made ready for delivery. This location does not serve as a storage place for finished products. In principle, the production items stay here for less than 24 hours.

The terrain offers sufficient space for storage, and the area is closed off by a gate. Although it is Bicsma’s intention to place a fence, the city’s development plan poses limitations in this respect. In the current situation, it happens that containers filled with PET-bottles are stored at the back of the area, while sometimes there are piles of empty crates. These are removed on Fridays before lunchtime.

Woerden 1 is the production unit (line 3). Woerden 2 now accommodates the distribution centre but is likely to become the location of part of the production activities at a later stage. The two sites are situated 250 metres from one another. Both Woerden 1 and Worden 2 have office spaces.

Both locations in Woerden are not far from the town hall, the police station, the hospital and the fire department. These facilities are all situated in a periphery of one kilometre. At the northern side of this area lies the transport company of G. Snel. Bicsma has no knowledge whatsoever of the storage and transport activities of this company.

The neighborhood suffers considerably from vandalism. Particularly during the night, undesirable events take place. To give an example, recently there were illegal street races. Bicsma, some other businesses in the vicinity and the police have therefore decided to collaborate in order to increase the safety in the area. This arrangement, however, is limited to working hours.

Although Woerden 1 in the Molenvliet district is an older building, it still sufficiently meets Bicsma’s requirements. The expectations are that that some five years from now the unit will be moved to Woerden 2, with a new production hall at the back of the terrain. Bicsma is in the process of negotiating this plan with the municipality of Woerden.

The product line for new vitamin drinks has been set up in the production hall of Woerden 1 (line 3). This is also the location where Whizzie is produced. Maintenance activities for this production line are executed by Bicsma’s own maintenance service, located in Breukelen.

Woerden 2 is situated at the new industrial terrain De Barwoutswaarder. The municipality of Woerden considers this area as a flagship meant to attract new businesses. Two other large companies are also located here: Diverspack, the “creative cheese packager” and Frames, an enterprise that makes unique and user-friendly structures out of 100% recycled old pallets. Mainly “clean” and light industry can be found here. The terrain has no fence, but at some places cameras have been installed.

Should Bicsma be planning to expand, it could do so at the western side of Woerden 2. Here, there is a small strip of land that is currently not used. Until recently, a farmer used this land for growing apples and pears. The municipality has started a buying-out procedure with the farmer so that the industrial terrain can be extended.